Small molecules such as amino acids, sugars, and organic acids exist in our body. Many of these compounds are “metabolites” produced through enzymatic activities.

The term “metabolome” refers to the entirety of metabolites contained in a living organism, and the method of comprehensively analyzing the types and concentrations of these metabolites is known as “metabolome analysis” or “metabolomics”. 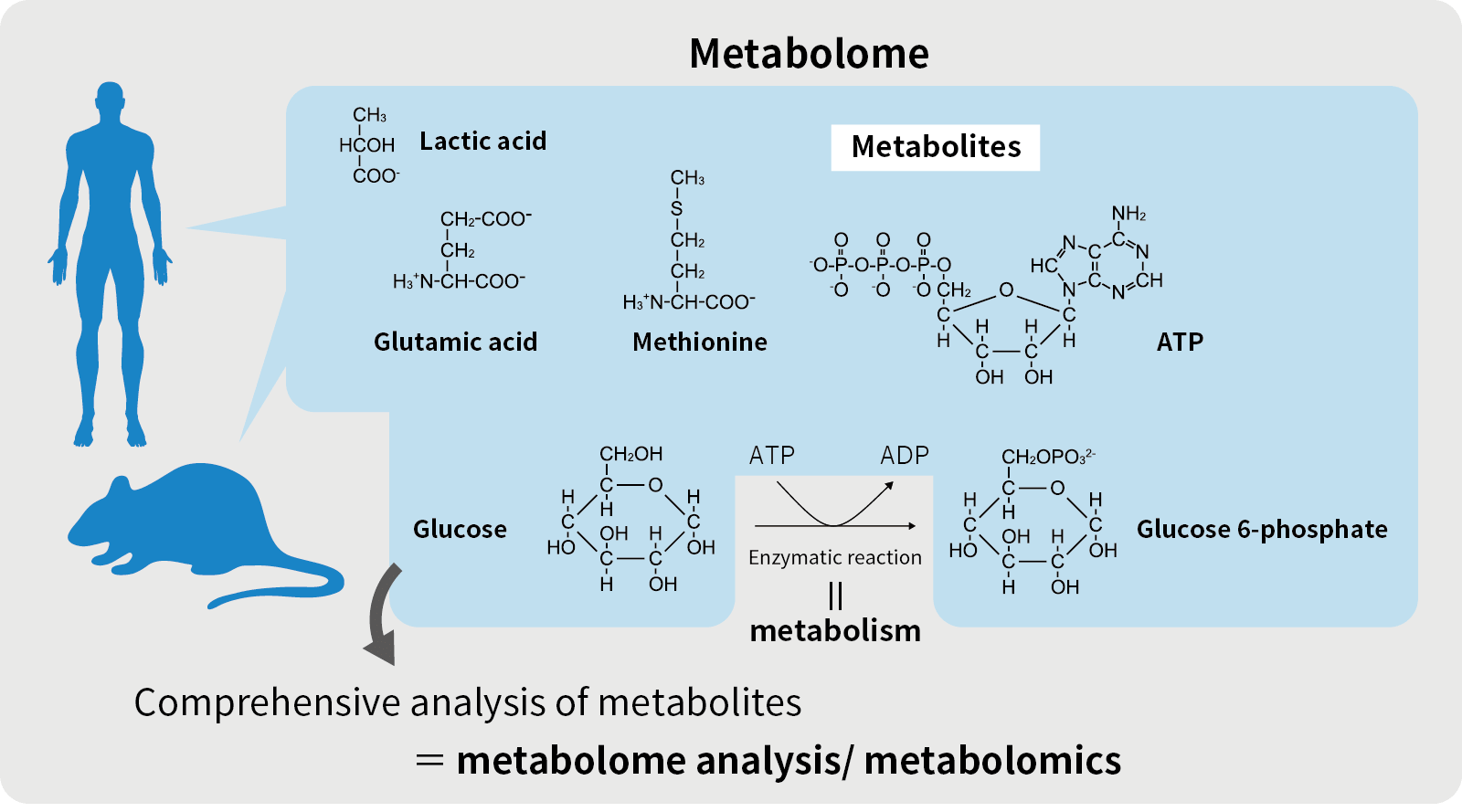 What does it mean to analyze the metabolome?

Each metabolite is connected to the others through “metabolism” in the body. Metabolites ingested from a diet not only have physiological activities of their own but can also become precursors to other metabolites. Moreover, newly produced metabolites can become different compounds or return to their original form through complex metabolic pathways.

Metabolism not only occurs intracellularly but also in other tissues such as muscles and brain through blood and other fluids, including urine and cerebrospinal fluid (CSF), and maintains homeostasis in a coordinated manner throughout the body. Therefore, when metabolism is affected by external stimuli (environmental changes such as temperature, light, drug intake, etc.) or diseases, the types and concentrations of metabolites in the cells can also change. 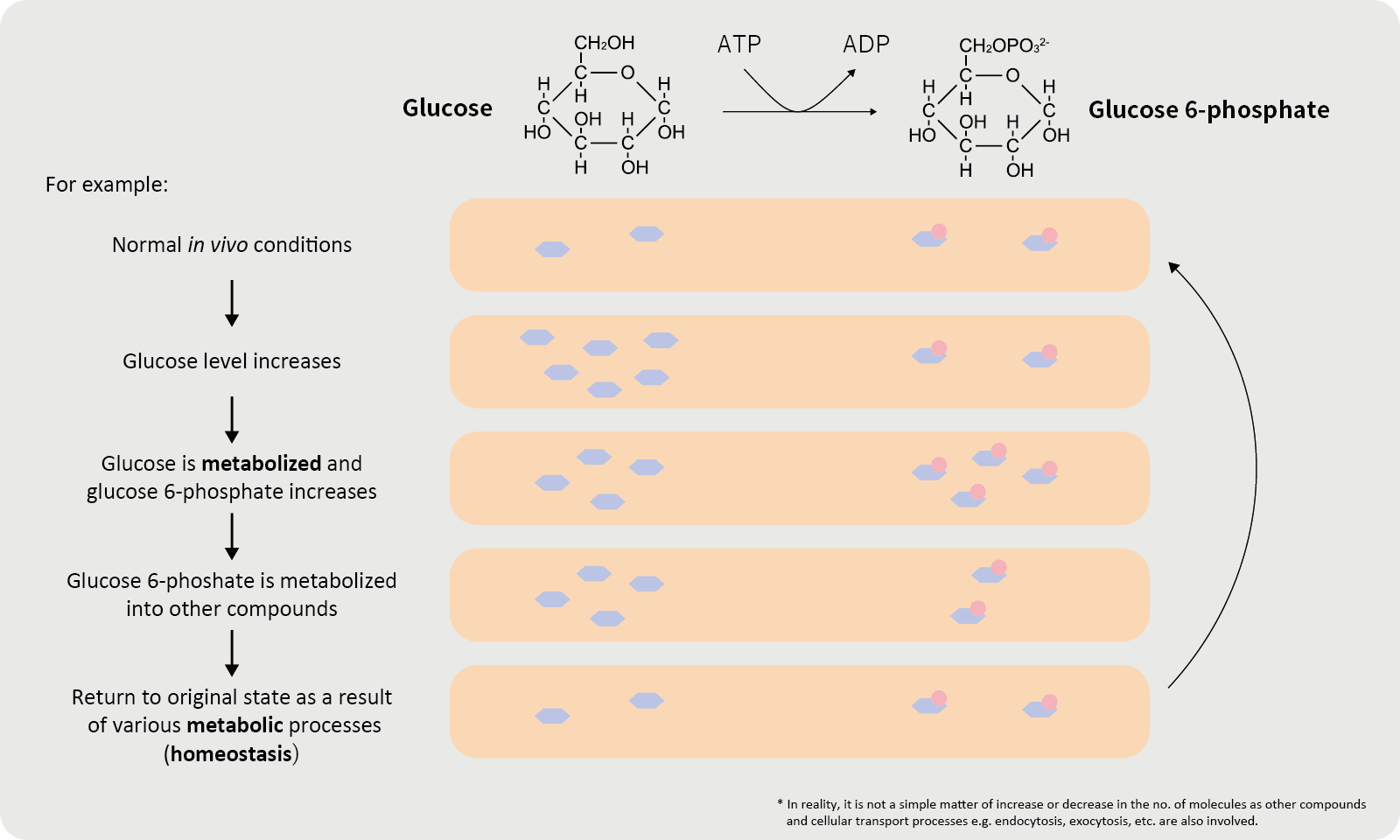 Metabolome analysis, which is a comprehensive analysis of metabolites, enables us to grasp how metabolism changes in the body, allowing us to understand life phenomena more deeply. Furthermore, detailed analysis of these metabolic changes enables us to search for biomarkers and formulate or test various hypotheses regarding the organism’s metabolism. 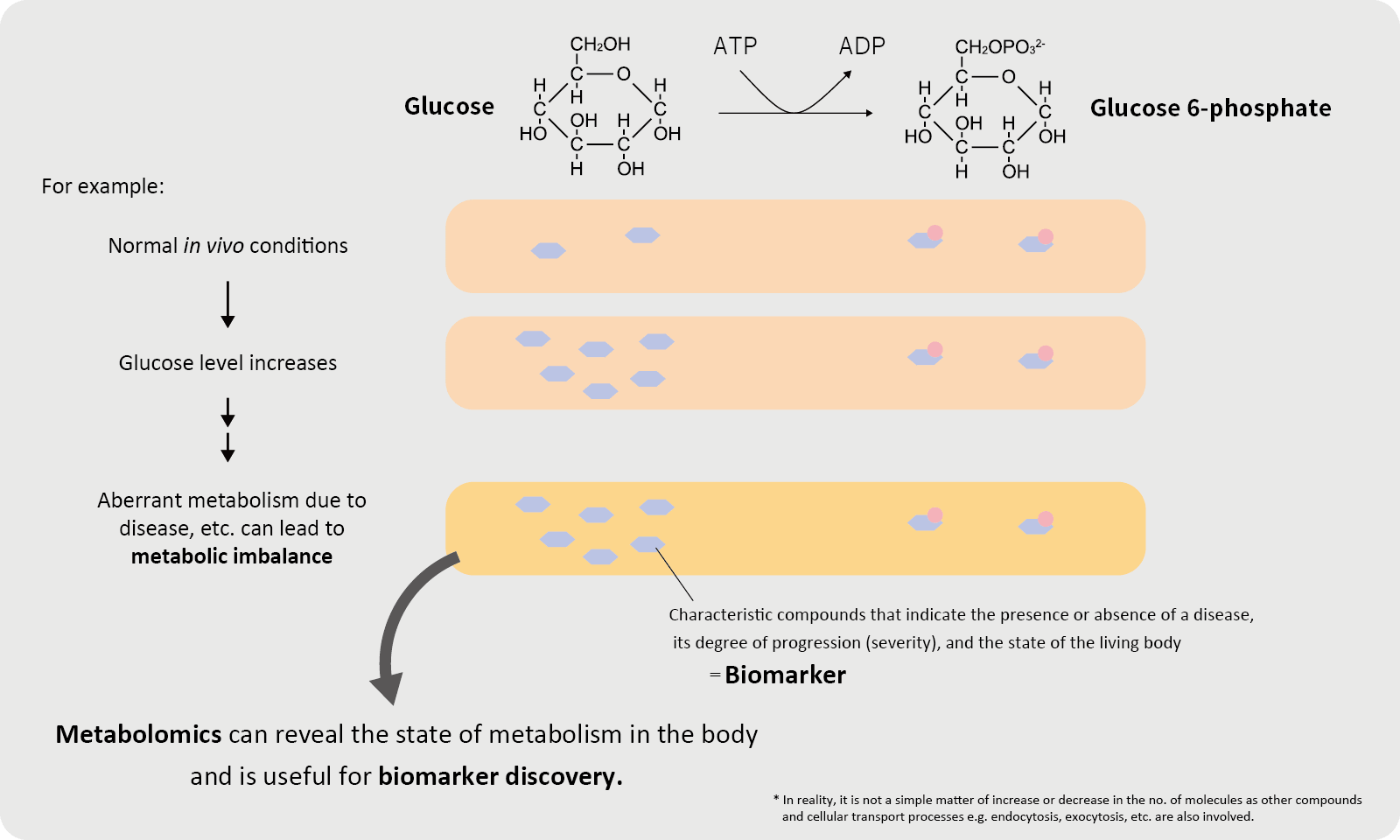 Extensive analyses of DNA sequences (genomics) and proteins (proteomics) are important tools in deciphering changes in living organisms. However, characterizing the genotype-phenotype relationships using these tools alone may not be enough. By using metabolomics to focus on the metabolites that largely reflect the current physiological state of the organism, it is possible to clarify what influences the phenotype.

Other advantages of metabolomics include:

Metabolomics reflects the “state” rather than the “structure” of a system, making it suitable for the screening of changes that are closer to the phenotype. Some of these examples include:

On the other hand, it is not suitable for studies that focus on localized metabolic abnormalities or signal transduction.

Metabolomics is ideal for:

As mentioned above, metabolome is a collection of low molecular weight metabolites. Hence, the key to metabolomics is the technology to simultaneously and comprehensively measure the levels of metabolites present in a sample. Above all, since it is necessary to maintain the qualitative and quantitative properties of individual metabolites, instrumental analytical methods that provide high level of separation and analysis of metabolites are used in metabolomics.

However, the metabolome contains a large number of metabolites with widely differing physicochemical properties, such as amino acids, amines, nucleotides, sugars, and lipids; at present, a single method for simultaneously analyzing all metabolites using just one instrument does not exist. Therefore, a combination of several complementary methods is practically required. The most commonly utilized approach is the use of a mass spectrometer as a detector after separation by a method fitting to the nature of the sample. 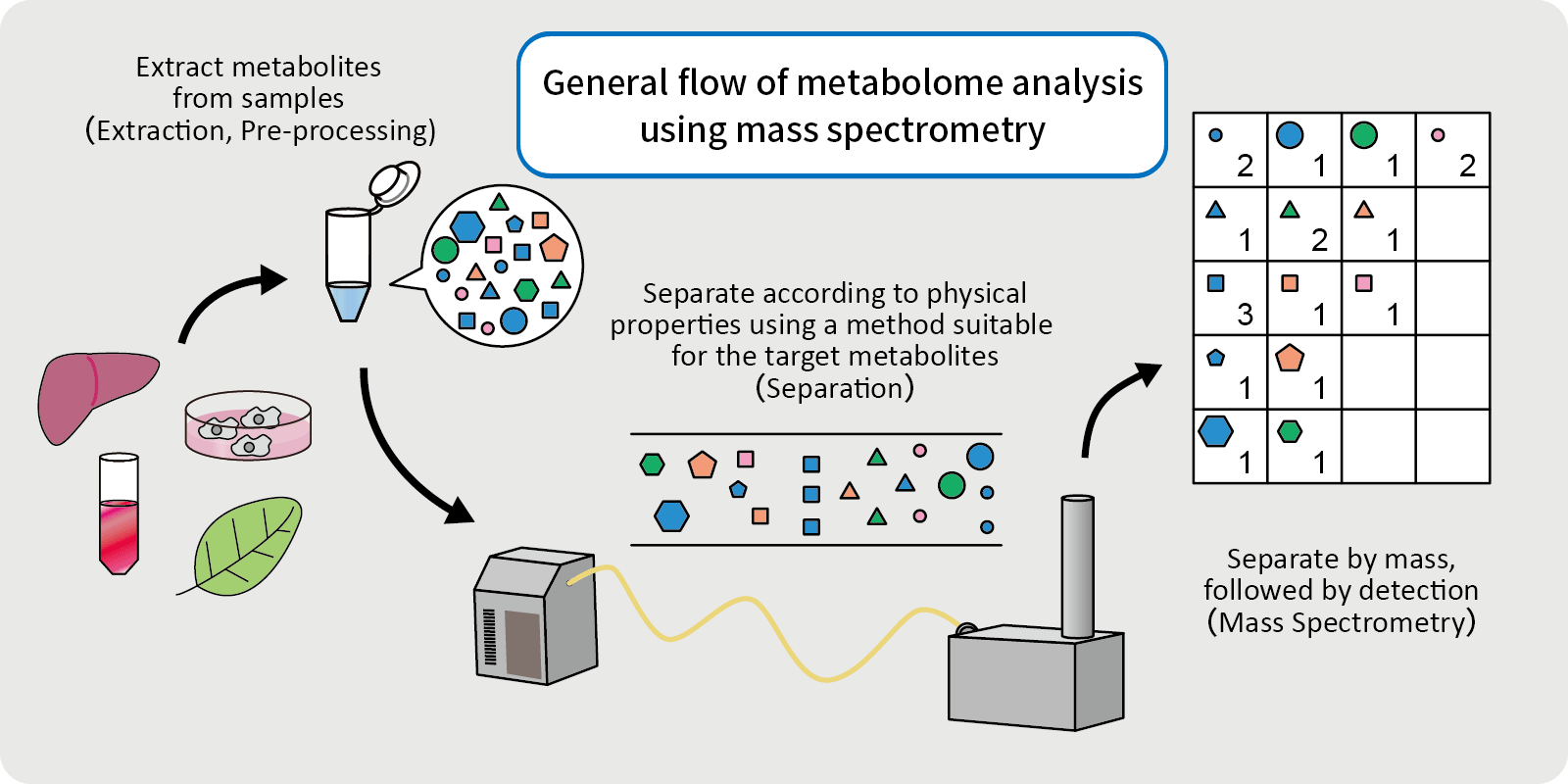 What is mass spectrometry?

Mass spectrometry (MS) is an analytical technique in which a sample is ionized, and the ions produced are separated by the action of an electric or magnetic field to obtain an m/z value. Compounds with similar molecular weights can be separated by passing the sample through a separator before it reaches the mass spectrometer.

Different separation methods are used, depending on the nature of the molecules and they include the following:

The physical properties of metabolites can be classified from various aspects, such as hydrophilic or lipophilic; ionic or neutral; and volatile or non-volatile. By performing separation analysis according to the characteristics of each metabolite, these metabolites can be analyzed with high accuracy. 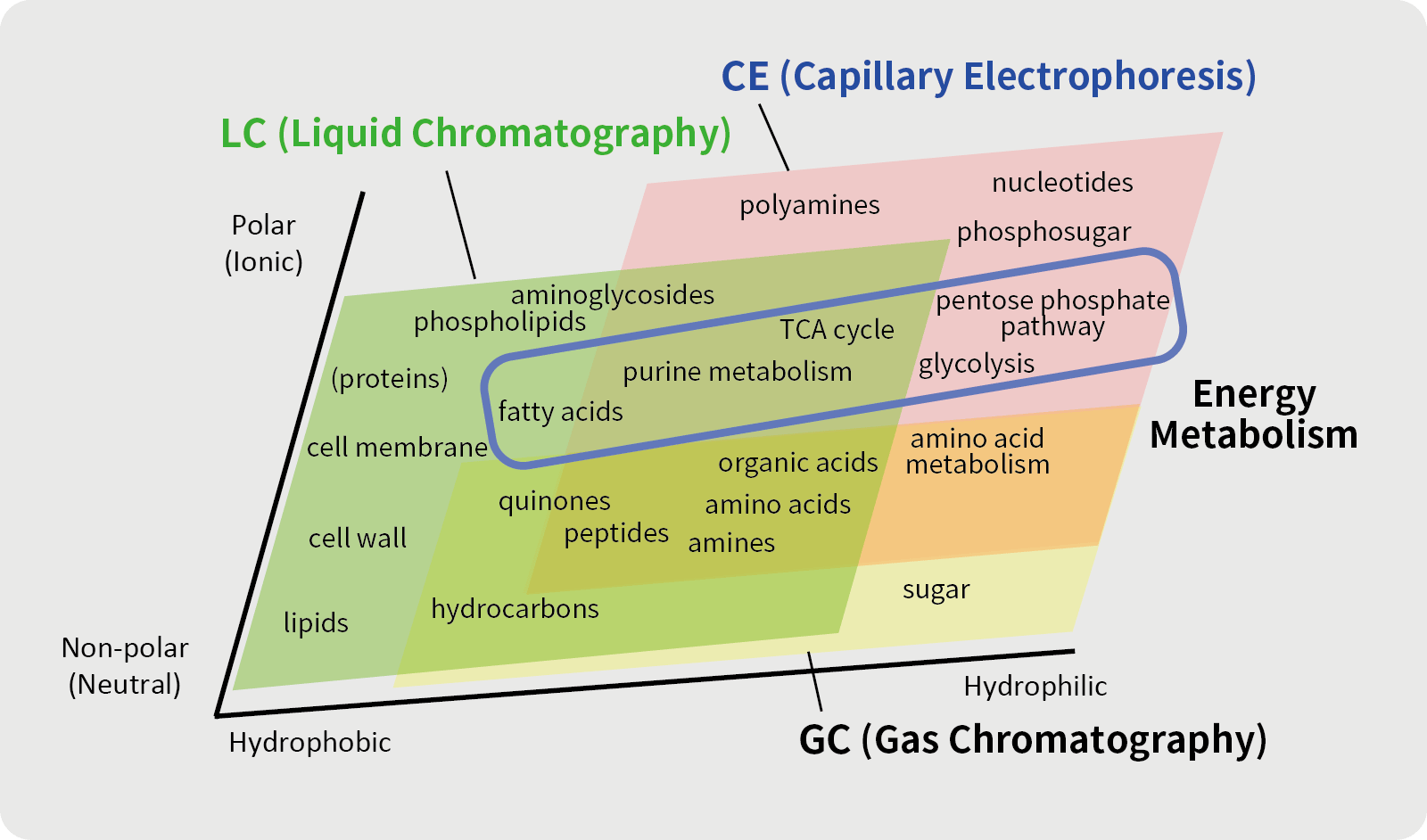 Comprehensive analysis based on energy metabolism in cells

HMT focuses on the fact that most metabolites are hydrophilic and ionic small molecules, and develops analytical methods based on CE-MS, an analytical technique that combines capillary electrophoresis (CE) and mass spectrometry (MS), which is suitable for measuring such metabolites.

In particular, sugar phosphates, which are major players in energy metabolism, organic acids, which constitute the TCA cycle (citric acid cycle), and nucleic acid-related metabolites such as ATP produced from these acids, have hydrophilic and ionic properties, thus making CE-MS-based metabolomics ideal for comprehensive analysis centered on intracellular energy metabolism.

For more detailed information, download our Service Leaflets from the following page: 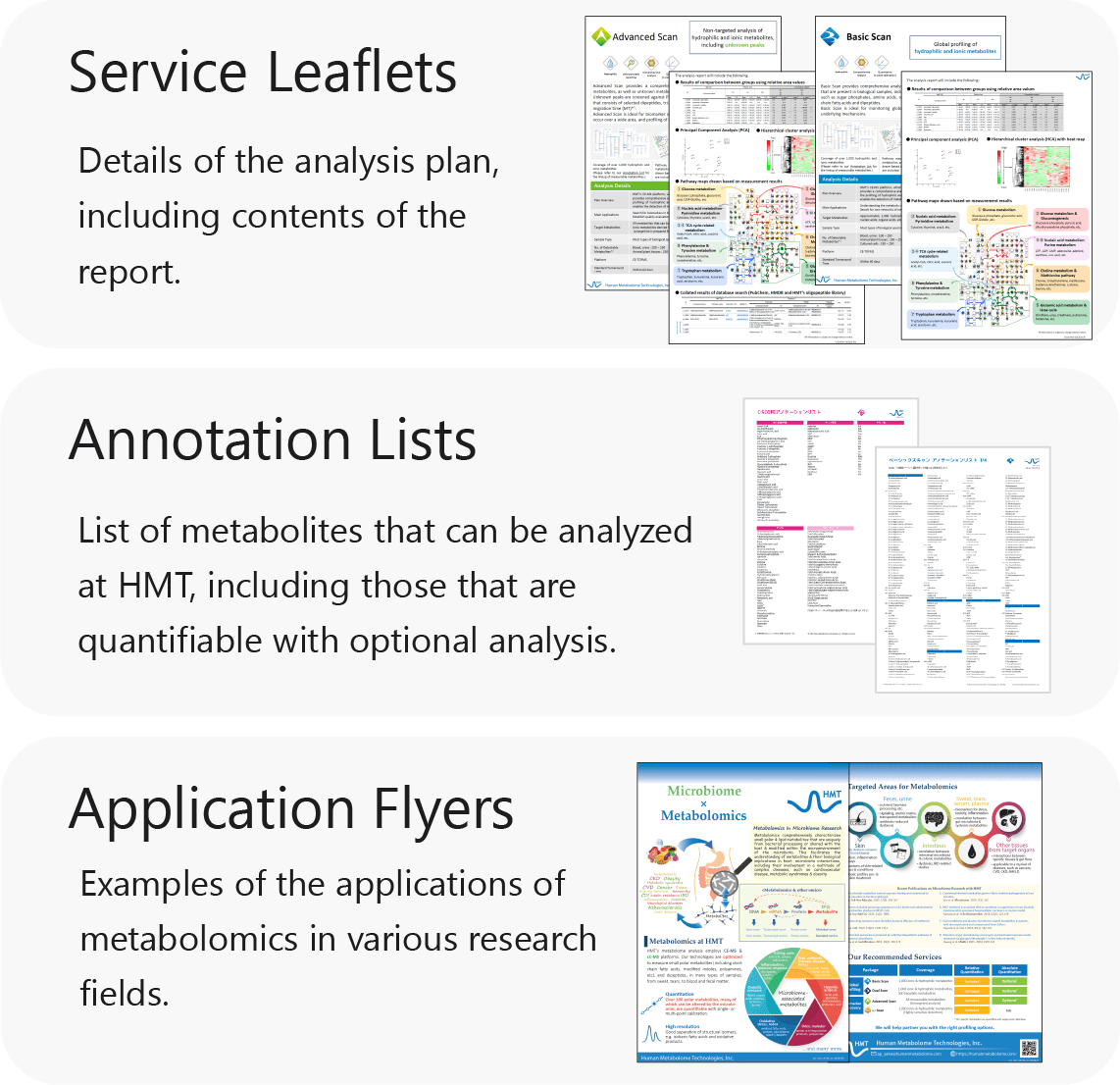